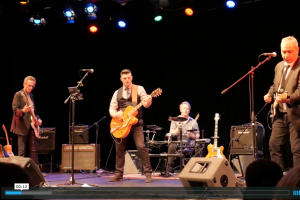 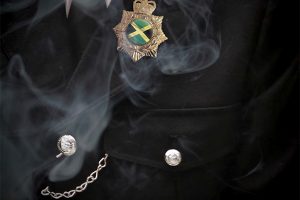 “Musically, New Zealand has nothing to commend it. Oh, there’s This Little Badge, of course – imagine Ian Dury writing the lyrics for a 1970s synths-and-concept-album-free version of The Who. Perfection improved!” – The Idler magazine, #55, July/August 2017

Are they geeky?: We’re more software than hardcore. What defines a geek? The need to wear glasses? You find the ocular jocular, do you? I find that a bit face-ist…

Are they hipsters?: When the occasion arises, we can be quipsters, tipsters, spicy dipsters, checkers-of-sundry-video-clipsters. But musically, we are definitely and always cut-the-crap-and-get-a-gripsters.

Are they dad rock?: The Temptations made the observation that Papa was a rollin’ stone. Using that definition, This Little Badge could be called rockin’ gravel.

Most likely to: Blow your socks off.

Least likely to: Bore your pants off.

Dave Pope and Paul Hamilton were in a band called Horrible Head. Next, they were in a band called Yellowjack. There, they wrote a song called ‘Next’. Next, Pope moved to New Zealand. Pope performed ‘Next’ in his next band, Monkey Grip. The next thing we knew, Pope had changed the band’s name to This Little Badge. Confused? You ain’t heard nothing yet. There isn’t a song called ‘Nothing Yet’, yet.