Three years ago on this very day, as all you calendar lovers out there will be painfully all too aware, Babylon Squeak unleashed their debut release (“Bubblegumboots”) to a fanfare of muted trumpets and air drums. Five E.P.s and 17 songs later, The Squeak have unshackled “CH*PPY”, their latest brood of chirpers from the Smoking Ant nest. Mastered by Si Beex and featuring harmonica honkage from Phil Harris (of Poundshop Glasses and The Mudcats boogie ensembles), they await your discerning lugholes here at Bandcamp.

Opener ‘Nobody’s Fool’ has a bridge that could be described as “David Bowie meets Hong Kong Phooey” (especially by those who love saying that sort of thing). Reggae loper ‘Dead Leg’ – the ultra-thrilling video of which is here on Vimeo – concerns the pincer attack of gout and sprained ankles. Surely a feet worse than death. Penultimate track ‘The Enemy Within’ is about – well, work it out for yourself. ‘The Last Hello’ closes the set with its cowardly backing out of a relationship. Yes, we’re sorry; it’s one of those emotional songs. We promise never to bother you with such things again. 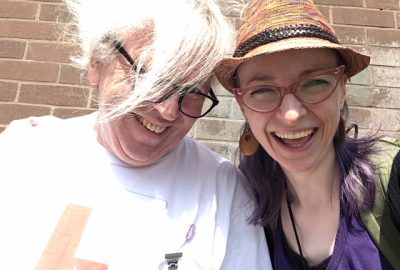