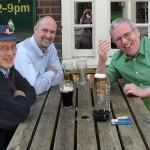 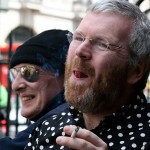 Three central London postmen converged in 2005 to bang and twang some self-written ditties. Their debut album ‘Grasshopper’ (2006) was a shambles and has been deleted by public demand. Follow-up ‘Oojimaflips’ made a year later was a definite improvement with songs about George Best, senility, Bullshitters’ Conventions and fascist juntas. The ranks were swelled by the augmentation of guitarist Gavin ‘Guru’ Murphy on three songs.

The 4-piece Reticents was too crowded for Toynton, who decided to sit out their 3rd LP, ‘Bad Line’ in 2008, rejoining the band when The Guru was bounced. The original trio produced a CD single ‘I’m All Right (It’s The Others)’ and a download E.P. (‘I Want One Too’) released in the sizzling summer of 2010.

Reticents never actually broke up – or, if they did, they didn’t notice it. Maybe they were too reticent for their own good. Maybe it was ‘musical indifferences’.

Following an enthusiastic application of neck oil to mark the 10th anniversary of their debut, Reticents agreed to make a new record in the late summer of 2016. The result is ‘Tough To Trace’, a four-minute one-song album that appeared in November that year.