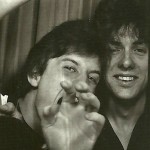 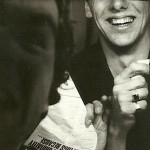 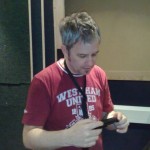 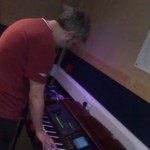 Douglas Murphy (left), Paul Hamilton (centre) and Simon Beacon (right) were friends in Basingstoke in the early 1980s. They grew up and apart – Paul to London, Simon to Australia, Doug to Norway – but the opportunity arose in July 2009 that they could all meet up for one afternoon in the snoozy county of Kent. So they decided to mark this event – the first time they’d been in a room together since the summer of 1983.

So they booked a recording studio.
And they wrote some lyrics.
But there was no time to rehearse.
There was no time to discuss the possibility of rehearsing.
Simon stood at a microphone with sheets of lyrics in his hand.
Doug plugged a bass into an amp.
Paul sat at a drum kit.
They looked at each other.
Paul counted, “One-two-three-four.”